Zach Spark bags a cracker stag as reward for years of reconnaissance and knowledge acquisition.

This is a story of patience, perseverance and teamwork. I’d been hunting sambar an area in the Alpine National Park regularly over the past three years with little to no success. I’d always walked up into the catchments on day hunts, usually running low on time and motivation due to the enormity of the systems coming off the valley floor. So, after a lot of Google Earth time I decided it was time to hit the back country, way up from the valley floor to see what was living in the very top of the gully heads. My mate Seb’s arm was very easily twisted, and we decided to venture in for a scouting trip.

We arrived high up in the watershed, with the intention of crossing several ridges and dropping deep into a system in the national park, where we would split up and hunt our way down to a feeder junction over the course of the day, then climb out the following day. We slowly picked our way across the tops, glassing into several systems for future hunts, checking sign and discussing our strategy for the day. Snow flurries, sleet and light rain helped to keep us moving, as it was clear we needed to drop a few hundred meters to get off the frigid tops and into some more fertile country.

After a few hours we arrived at a great vantage point over our chosen catchment. We split up; I worked my way down a ridge, glassing ahead of my path and across the opposite face whenever visibility allowed it, with Seb working his way across the catchment in another feeder, doing the same thing.

Two hundred meters down, the sign got very fresh and the stag activity increased, with fresh rubs, preaching trees and well-used bedding areas. I stayed on this elevation and carefully worked across, a few steps at a time, glassing diligently for any sign of big brown deer.

After three hours I’d covered 250 meters without any success- my side of the gully was a ghost town and I suspected the sharp breeze working its way up the face wasn’t helping my cause. I radioed Seb, who was in a different area and he informed me that he’d already seen three unalarmed deer — a hind, a spiker and a calf. This gave me renewed hope, and I focussed solely on the opposite face, as it appeared to be sheltered from the wind and was also catching more sun than my side. I found a small clearing that gave excellent visibility and settled in for an extended glassing session.

A hind appeared seemingly out of nowhere, 370 yards across the gully — as they have a habit of doing. I watched her closely as she stood still and sunned herself, intently looking at something in a small dogwood thicket, diagonally down and across from her. For five minutes or more she stood relaxed but fixated on what I assumed would be her calf, a yearling, maybe another hind, or even a wallaby.

I scanned her line of sight across the face and saw something that would change the course of the day. For a split second I got a picture-perfect view of a stag’s head, gazing lazily across the gully towards me, casually munching on feed in the thicket that the hind was watching. I fumbled with my binoculars to get a better look, but as quick as I spotted him, he had vanished.

Five minutes later I got a glance at a huge, sun-drenched bronze flank. Again, I fumbled my binos to get a better view, and again this spectre vanished in a grove the size of an inner-city backyard.

I’m not a crazy person. I was sure of what I had seen, if only a fleeting glimpse, but doubt has a knack of setting in during these situations and that’s where I now found myself. Had I jumped at a shadow?

The hind had lost interest and slowly fed out of sight. I was left staring at a scrubby mountain face, with a small mystery patch of wattle and dogwood capturing my attention. The area all around was relatively clear. There was no way he could slink away.

I got on the radio to Seb and explained I was going to wait out the stag, then put a brew on and settled in for the afternoon.

Over the next hour I changed viewing positions several times, desperately trying to get an angle on the other face. I ended up behind a small fallen tree that I could stack my pack on for a solid rest to shoot across the gully. 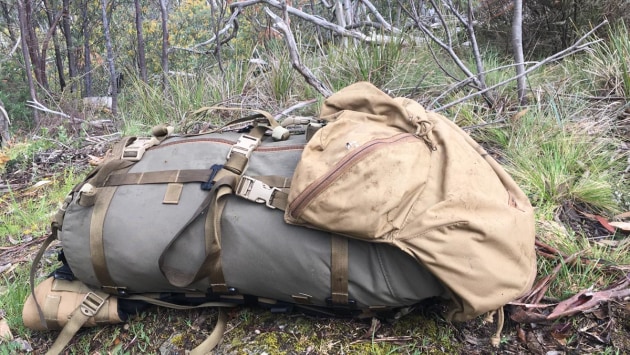 After an hour and a half of nothing, the hind reappeared. Again, she was casually but intensely glaring into the scrub, picking at shoots and surveying the area for danger. This gave me a lot of confidence that the stag had indeed bedded down and was probably having an afternoon snooze.

His girlfriend got impatient and wandered into the thicket to join him. Another 20 minutes went by and finally the hind popped out of the scrub below where I suspected the stag had bedded, and she fed with more purpose, working her way down the hill towards the lush gully floor.

I re-checked the range of the hind, as I suspected this is where the stag would end up — 330 yards. I set up my rifle for this range and as I put my binoculars back onto the undergrowth, I finally saw action. A sapling was getting thrashed savagely in the thicket, slightly lower than where I had originally seen him. I waited with bated breath as the king of the hill materialised out of the wattles and dogwood, right on the tail of his hind. 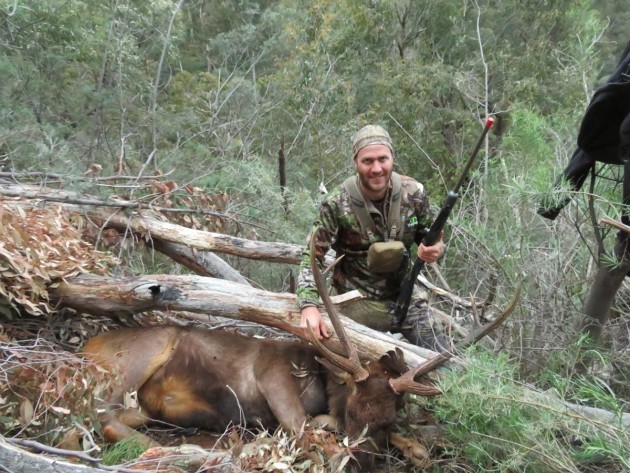 He had swagger, he had attitude, he was totally relaxed and casually started picking at new shoots. I settled in behind my rifle, double checked the turrets and relaxed into a slumped, seated shooting position over the full length of my backpack. He worked his way into a broadside position as I exhaled deeply and touched off a shot, sending a 185-grain Berger VLD across the valley.

The rifle bucked and landed back on target, so I saw a solid hit and a deer drop out of sight, tumbling down the hill. A solid thump came back across the gully as I reloaded, ready for the stag to somehow regain his feet. The hind scampered like a mountain goat across the gully face and disappeared. There was no thrashing, no commotion, just calm up and down the valley.

I called Seb, who wasn’t far away from my position at all, having worked his way quietly across the face I was on in anticipation of this very moment. 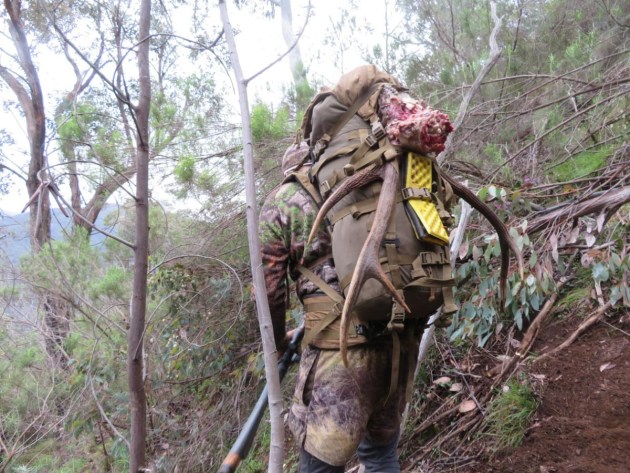 After dropping down the gully and scrambling up the other side, I finally reached the general area where I hoped to find a very dead, very large stag. I’d memorised every tree’s position over the last few hours, so it didn’t take long to find the shot site, and that’s where I found him, deader than disco. The stag had slid down only 10 meters and was wedged firmly under a fallen tree; no wonder I couldn’t see him from across the gully!

I felt a huge waive of relief, endorphins and joy course over me. These are the moments we all work for, sweat for, even bleed for.

Seb made an excellent video fo this hunt, which you can see on Youtube.