Foxes have had a major impact on the Australian fauna, predating on ground-nesting birds, mammals and reptiles. Moreover, foxes compete with Australian native animals for food and habitat and can act as a reservoir of disease for wildlife and domestic animals.

People have started trying to rescue and pet foxes across the country. These same people show a total disconnect to the damage that this introduced species is reaping on small Australian native animals.

On Tuesday, four Agriculture Victoria officers and two police officers seized three foxes from Donna Pearson's Wurruk home, east of Melbourne, where she had been keeping them as pets.

The animals were later euthanased under an order from the Department.

Under Victorian legislation it is illegal for people to keep foxes because they are a declared pest.

Ms Pearson could face fines of up to $9,671 for keeping each fox and additional fines for defying an order by Agriculture Victoria to destroy the animals.

However, she said she kept her three foxes in a secure fenced area which posed no threat to other animals.

"If you follow a certain criteria that they should not get out of their enclosures, why can't we keep them," she said.

We keep cats, they kill marsupials, they do a lot of damage and people just let them go.

"Foxes can be domesticated, just like any other animal."

Foxes are an "established pest animal" under the Catchment and Land Protection Act.

The Victorian Government considers them a "keystone species that reduces biodiversity and impacts on the survival of native prey over large areas of entire ecosystems".

In a statement, Agriculture Victoria said it was "an offence under the act to keep or release a fox".

It confirmed the animals were seized and put down "under warrant from the Magistrates Court".

"The warrant provides for the seizure, destruction and disposal of the foxes. Declared pests seized under a warrant are disposed of humanely in line with established procedures," it said.

The statement also revealed there may be "potential legal action" against Ms Pearson.

Ms Pearson acknowledged she has broken the law by taking on the young foxes, which were about 10 months old.

One thing I do agree with is that roaming and feral cats can do equal damage to our native wildlife.

Watch this fox squeeze through the tinest hole in a uburan fence. 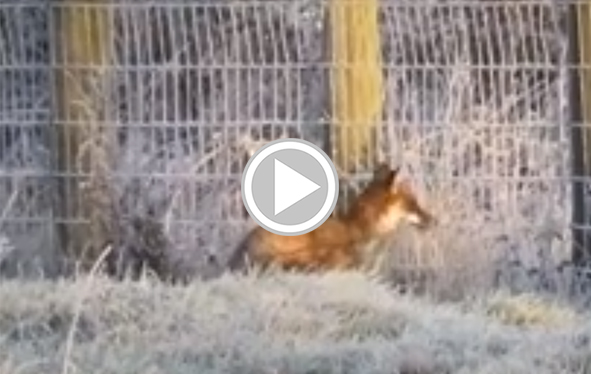