What started as a juvenile shock value photograph of Natalie Cepeniuk in a blood stained shirt holding the dead baby kangaroo up to her mouth has gone global. This photo does nothing but sabotage the image hunters and shooters of Australia fight to maintain.

After seeing an image like this you have to question what would drive a person to do this and then post the image on social media.

The last 24 hours have seen a huge commentary on this post and it has highlighted that this is not the first crazy or questionable action for Natalie Cepeniuk.

A quick google search unearths post after post of a sad and disturbing history of incidents involving Natalie aka Natalie Maree Wrangler. I have also had my own personal experience with moderating some of her posts over the years and have had the pleasure of some vulgar messages.

Despite the photo being shared late November, a wildlife activist drew attention to the confronting image at the weekend prompting RSPCA NSW to investigate the photograph.

Ms Cepeniuk, who is the former girlfriend of the 2015 Channel 9 series star Lachlan McAleer, took to her Facebook page to

defend her actions saying she 'hit a few nerves with a few greenies and haters'. '[The joey] was humanely put out of its misery because it's mother jumped in front of my ute,' Ms Cepeniuk wrote.

'It was also pretty pink, meaning it had f*** all hair on its body .... being mangled there was going to be a f*** all survival rate unless they have homes for retarded joeys".

'You better get me charged for eating moths and beetles too ... cause I eat them.'

People make mistakes and pay for it when they post them on social media but in this case where there is smoke there is fire. Unfortunately, I don’t think we have seen the last of these attention seeking acts and it’s only a matter of time before images like this will affect the past times we all enjoy and love. 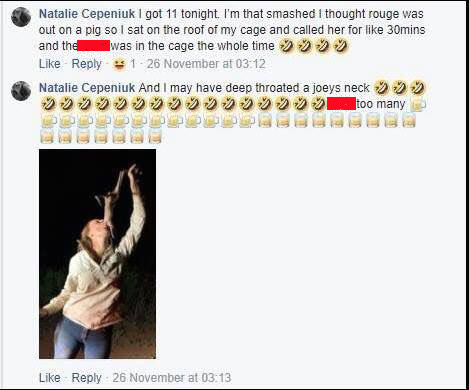