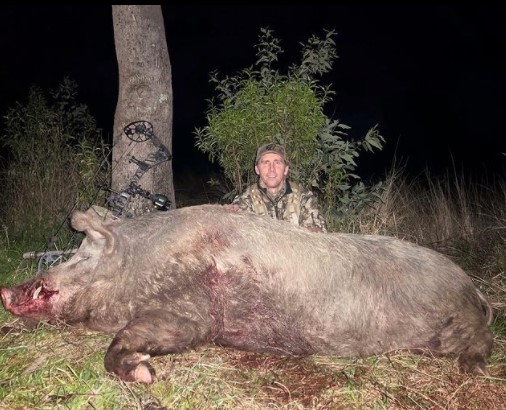 A once in a lifetime opportunity presented itself when I was asked to hunt down a boar that had been around for a few years with only a couple rare sightings. I’d tried to a number of times to locate him only ever finding his huge footprints.

He’d previously cleaned up an entire bull that had to be put down with a broken leg. Now he was devouring a cow that died calving.

This was his down fall as I waited all day off this carcass. He showed up on a scrub line several hundred meters away feeding on a green pick. I immediately recognised he wasn’t going to move across the open ground in daylight so made the distance to him. Full up on adrenaline with my senses on alert, looking out for anything that might alarm him. A small stand of trees was a God send as I closed to 20m.

I didn’t have to wait long for a slight quartering away shot hitting top of his heart. I then watched him half trot/walk off. At 50 odd meters I thought what the hell I’ve knocked the top off his heart. So I cut around to hold the wind in my favour and as I closed in he lay down.

So at 17m I double lung shot him as I would do for a buffalo and he got back up and walked off like nothing had happened another 40m and then fell over never to stand again. The shear relief and adrenaline and excitement was overwhelming. So grateful for such a memorable experience on such a huge beast.

Both 3blade elite 1” arrows were almost pass through shots with 2/3rds of the shafts hanging out the far side. It was almost like in some way I was preparing for this day without knowing. By converting the mathews traverse into an 84lb bow with monster wake limbs. The bow I now call the traverwake bow!

To give some perspective on the size of this boar. I’m 6 foot and 84kg. We had to use a quad bike to move him for the pictures when my brother arrived. The quad bike was only just able to do the job to get him to the car avoiding the swampy condition of the wet season. Then the Toyota Hilux dragged him to the shed where he was weighed on cattle scales at 254kg live weight.