Like many other hunters his age Leon Wright has a soft spot for the old rabbit and why not? They are great sport, especially when employing ferrets. The very first rabbit hunt I went on with my dad, we were using his old single shot .22 rimfire. It was a ‘Huntsman’ model made by Sporting Arms in Adelaide. It was that heavy I had to rest it on a stump when it came my turn to have a shot. I still have it and it brings a smile to my face when I pick it up, it barely weighs the same as a packet of shotgun shells. 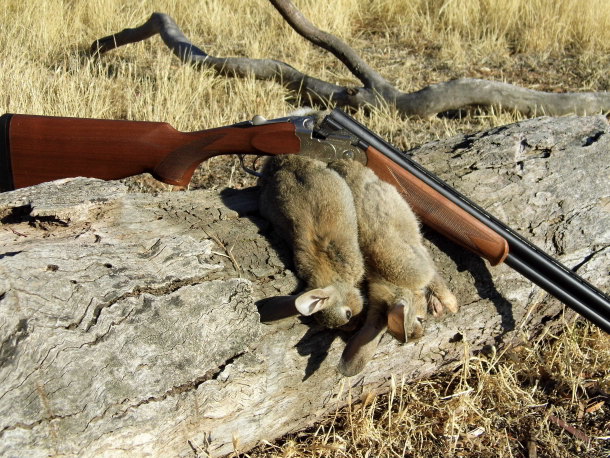 I have shotgunned them over dogs since the time reloading shotshells was economical and I have “varminted” them from long range using hot-shot .22 centrefires. Spotlighting was and still is high on my favourite list for hunting rabbits. I have literally shot them by the 100’s while out spotlighting using either a .22 rimfire or a shotgun.  Rabbits are probably the only critter you can shoot in the hundreds without drawing any flak from environmental groups, such is the damage they do; everybody seems to dislike them, that is everyone except us hunters.

However if I had to pick one method of hunting rabbits above all of the others it would have to be taking them with a shotgun as they are being flushed from their warrens by ferrets, it is the ultimate in rabbit hunting as far as I am concerned.
Although I have not done it for some time I have just started getting back into it. I have owned and used ferrets for rabbit hunting for most of my life.  At its height I had about 14 ferrets, such was the amount of shooting we were doing.  Having that many ferrets was not without its dramas as one of my neighbours bred and showed Rhode Island Red chickens. At about $300 a bird, needless to say he was very protective of them.  One day my children told me that the ferrets had gotten out overnight and were gone. Believe me it was a very nervous Leon Wright who took a peep over the neighbour’s fence to see if the chickens were alright. Luckily for me the ferrets had headed off in another direction and I was getting phone calls from the neighbours telling me they had one of my ferrets bailed up. 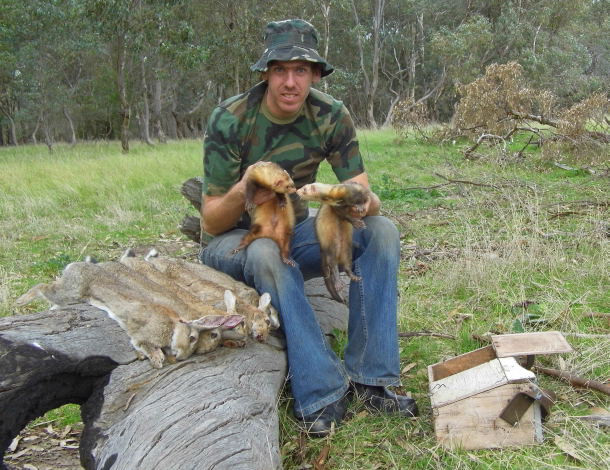 Another time after returning home from a hunting trip and I was in the process of transferring the ferrets from their carrying boxes to their cage when I noticed one of them was missing. Standing there wondering where in the hell it was and having heard a scream from the driveway I became aware that my wife had found it in the car when she and the kids were heading off shopping; life can be hard for a hunter at times.

Taking rabbits with a shotgun as they burst from a burrow at incredible speed due to a ferret being hot on their tail can be pretty full on and downright exciting. Usually you get a bit of warning that there is action on the way as the rabbit, or rabbits, thump their way to the entrance. At times they get quite a rumble up thus giving you plenty of warning that they are on the way.  However it usually takes you by surprise as they burst from the burrow and are away with incredible speed.

I have always used a 12 gauge, but a 12 gauge, which is probably the worst choice for such shooting. With the shooting taking place at no further than 25 metres, I have tried every conceivable combination I could conjure up. A full charge of no 4 shot at 25 metres is not going to leave much unbruised meat for human consumption. Most of the older shotguns, like my Lefever side by side, were bored ½ and full choke and weren’t the best choice for such close shooting. It is much easier today with the changeable chokes and it takes nothing to switch from one to another.

To get around the lack of choke choices, I tried lighter loads of smaller shot. I eventually settled for a 1 oz load of No 6 or No 7 shot and found while not perfect, I was getting a less damaged carcasses over the ranges I was shooting. One day a friend from the city joined me for a day’s shooting over the ferrets and he was using a 20 gauge. He allowed me to monopolise it and I knew that I had found the perfect shotgun for such shooting. I decided there and then that when finances allowed it I would certainly be purchase a “twenty”.

It wasn’t until just recently that I have been able to purchase one, actually I have bought two. The first was a Steven’s Gold Wing under and over with interchangeable chokes. I have used it for a while and seeing that the 20 gauge really tickled my fancy I stepped up a grade or two and bought a Beretta Silver Pigeon under and over 20 gauge with interchangeable chokes; it was time to get back into rabbit hunting over ferrets.

By the look on my wife’s face I could tell that she was really enthused when I told her I was getting back into the ferrets. She calmed down somewhat when I told her we would be keeping the ferrets out at my daughter’s farm.  A short time later my daughter and her brother-in-law, Blake, turned up with a number of ferrets.

Anyone who hunts over ferrets have their favourite breed of ferret and I am no exception. I much prefer the polecat as I consider the breed a better worker and if I can’t get polecats I like the black eyed white ferret which I have found to be an excellent worker as well. Lucky for me Michelle and Blake had both breeds so we were well set up for some good hunting. Access to properties was no problem and we had properties available to us from the sandy country of the open plains of New South Wales to the open rocky hillsides in Victoria so we were well catered for.

I have always found the best time for hunting over ferrets has been from May through to early September. After that time the burrows are usually full of kittens and ferrets tend to run amok amongst them, eventually falling asleep in the burrow, leaving a frustrated hunter at ground level, waiting impatiently for the ferret to wake up.

While on the subject of ferrets staying down burrows the old bushie trick of smoking them out by lighting a fire in one of the burrow entrances and then placing green leaves on it to create the smoke led to the banning of ferrets in some states.

Eventually it was time to head out and give them a bit of a run to see if they were ready to work. A farmer friend, a few kilometres out of town, had a number of burrows around his fence line bordering a full swamp. The rabbits living in the dry swamp would have been pushed out by the rising water and with a bit of luck they would have taken up residence in the burrows we were going to try.

The first couple of burrows drew a blank but in the next burrow the ferret soon had a rabbit on the move; then the rabbit rocketed out of the burrow and was a good 20 metres away when the load of No 4 shot out of the 20 gauge caught up with it, sending it tumbling end over end.
While doing the next burrow, we noticed a rabbit hop out of a warren a further 30 metres away looking rather agitated. Blake quickly knocked it over with the 20 gauge as well as another that hopped out after it.

When we had finished doing the burrow we were on we cautiously wandered over to retrieve the rabbits we had shot on the other burrow only to be greeted by an aggressive brown snake. The snakes in our area have been really bad this year and it was only the other day when my brother had his good duck retriever out for a shot.  At one stage Mick saw ‘Jack’ carrying something so he called him over to see what it was; much to his shock Jack was carrying a live snake.

A few hours quickly slipped away and we found all of the ferrets were working, so after taking a number of rabbits, we were satisfied they were ready for bigger things. Now  a trip was organised on another property that held numerous warrens numbering from a few holes to massive complexes covering 30 metres or more.

After having a cuppa and a chat with the owner we headed down to the creek following his instructions. It didn’t take long to find a suitable warren with around half a dozen entrances so while Blake got the ferret ready I loaded my Beretta 20 gauge with what I considered a good combination for such short shooting. I placed a cartridge loaded with No 8 shot in the bottom barrel for close in work and a cartridge loaded with No 4 shot in the top barrel in case I missed with the first shot. Safety being the top priority I kept the shotgun broken until Blake had placed the ferret down the burrow and had retreated back behind me.

A loud rumbling from underground told us the ferret had a rabbit on the way and sure enough a rabbit squirted out of the burrow. I was caught a little by surprise by the sudden action and it took two shots to pull the rabbit up. Quickly reloading I was ready for the next one and it only made 15 metres or so before the load of No 8 shot sent it tumbling. A third rabbit met a similar fate and then the ferret poked its head out of the burrow. While I broke the gun Blake gingerly reached down and retrieved the ferret.

While doing the next burrow we could see a rabbit sunning itself on a nearby burrow so after we had retrieved the ferret we headed over to it. In next to no time the ferret flushed two rabbits and while I missed the first I managed to collar the second as it had stuck to a straight course while the first ducked between the nearby rushes.

Such was the order of the day, we moved from burrow to burrow; sometimes we were met with success, other times not. The ferrets worked brilliantly and at the end of the hunt we fed them all with their share of the rabbit. Our ferrets are an integral part of our team and are well looked after. They may only be ferrets as some say, but they are great little workers and more times than not deliver a day of good hunting.