As a regular active user of ANZAC Rifle Range at Malabar for its intended purpose ie target shooting, I watch the local media, primarily The Southern Courier, like a hawk. You see, they have form when it comes to overtly supporting those who would get rid of shooters from Malabar, so that any number of other potential users can crawl all over a site that has Australia's defence heritage in an active shooting facility.
In a recent move by the Commonwealth, the NSW Rifle Association (NSWRA) has been assured that we have permanent security of tenure on the site unless a mutually agreeable alternative can be found. The Commonwealth determined that moving NSWRA to Cecil Park was not a viable option. The Federal Department of Environment, under Greg Hunt, presumably in consultation with the site owners, the Federal Department of Finance also announced that there would be no development of the range portion for housing.
Simultaneously, they have handed back to the NSW Government the Eastern portion of the site, within which the danger template of the range exists, as a National Park. Now the local greenies were cock-a-hoop with this, until it sank in that access to that National Park by recreational users is impossible, especially when shooting is conducted on the adjoining range. Whoops! Sorry guys, but I can think of a few National Parks where access is denied to the public for any number of reasons eg preservation of water catchments etc.
Now walkers , fishermen, drug users, motorcyclists and all sorts of people have been illegally accessing the headland, when access without permission is tresspass and subject to stiff fines. Nobody, least of all the police have ever really enforced it and NSWRA have had an uneasy live and let live attitude to the situation except when shooting is being conducted. They, as a volunteer organisation, have no resources to police that access 24/7.
Consequently, the locals think it is their entitlement to access the headland when they like because of past years' experience - and most of them know full well they are breaking the law.
But now that NSWRA has telegraphed that they wish ANZAC to be open for shooting much more than has been customary over the last three years, we have a reaction from the local press that is pretty negative. I have attached two pdfs as link 1 and link 2 to this article which, when seen as a double-page spread (and in more detail) conveys quite a negative feeling about shooters in general. How so? 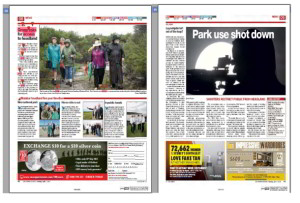 When you look at pages 8 and 9 of the 7th April 2015 edition of the Southern Courier as a DPS, you see on page 9 a silhouetted shooter, finger on trigger and his rifle is pointing in the direction of page 8 and an image of a Friends of Malabar walking group, made up of what could charitably be described as "senior citizens". The imagery, if you draw a very short bow is obvious, a shooter aiming at a bunch of defenceless old people who wouldn't harm a fly.
Then you look at the headlines and sub headings. "Group asks for access to headland". Why ask? You've always taken access as an implied right, even though it is legally tresspass. Why is it any different now. This paints the greenies as the poor, hard-done-by serfs begging the Lord of the Manor for a crumb from his feudal table. Pu-lease!
"SHOOTERS RESTRICT PUBLIC FROM HEADLAND". So how is this different to the legal situation that has existed for over 100 years. So why print it? I'll tell you why; it's painting us as the nasties here, who are taking something away from the rightful public, appropos of the point above.
"New National Park" heads a text box about Peter Garrett announcing protection for the headland and commitment to public open space in 2010 (intended for the range portion) for the loud empty vessels who make up the local anti-shooting farternity. The devil is in what they did not mention here ie that the previous Labor-influenced Department of Finance tried to kick NSWRA off the range after Garrett, somewhat presumptiously, made his announcement to the 30 Friends of Malabar Headland and a few strident dog walkers. The result is historic, in that the case was resoundingly won by NSWRA and costs were awarded, even after appeal by Finance. The nub of the judgement was a constituional test, which basically posited that the Commonwealth had the right to break any contract it had signed with anyone on the basis of perceived "executive necessity".
The "LONG HISTORY" box makes mention of the use of the range as a military training facility only during the two world wars, when it was in continuous use by Defence through those wars and Vietnam, right up until the late 1980s. Just a little bit of research never hurt a reporter if he or she wants to remain credible. By omitting this continuous usage by our nation's defence personnel, the heritage value of maintaining the site as a viable rifle range is lessened somewhat.
"Park use shot down" is a real clanger and some mentally-challenged readers would say it is a clever headline. Superimposed over a shadowy shooter taking aim at the aforementioned senior citizens, it carries a very dark and subtly evil connotation. If this is representative mainstream reportage in Australia today, then it resembles some of the barely-restrained utterances I see on facebook by ill-tutored and prejudiced punters.
Here are some emotive quotes from the text of the spread, designed to pit the readership against shooters.
"The general public wanting to explore Malabar Headland's newest national park will be kicked off during live firing on Saturdays and may not have access during the daytime to the icon of south-east Sydney's coast." Could journo James Taylor not have said something like "asked not to stray into a danger area" and "the hazardous, precipitous, scrubby, feral infested, graffiti strewn tract of restricted land". Never let facts get in the way, James.
Now if only one of these little niggles that I have mentioned managed to creep into a similar news spread I would not be spending these column inches telling you all about it. Taken as a sum of its parts, they've done a very nice and subtle hatchet job on shooters in Sydney and everywhere, for that matter.

Keep 'em in the bullseye,