This ammo has been in shops for a week or two and is selling like hotcakes. I spoke to Danny Galea from OSA yesterday and he said he is making minimal profit out of this great ammo so that shooters hit hard by rising ammo prices can keep shooting or shoot more.

Packaged in corrosion-resistant blister packs inside distinctive Buffalo River boxes, there is a choice of two loads: 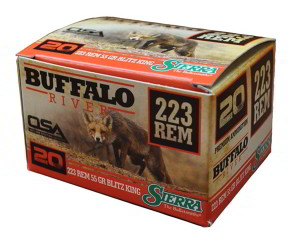 As and indicator of prices, Hall's Firearms is selling the Game King loads for $69 a hundred and less for bulk sales. The Blitz King loads cost a bit more but are still well under $100 a hundred. The brass is ADI, so this is good quality stuff that should shoot well. As a footnote, when you buy in cheaper bulk lots it comes packed in Defence ammo tins.