From our friends at Owen Guns in Gympie comes a call to arms for all those shooters who would be interested in a rifle range complex near that city. Essentially there is agreement in principle from the Minister to excise land from Corella Forest and grant a lease to Gympie Regional Council so they can in turn lease it to the Cooloola Range Complex Association. The Association aims to construct a rifle range complex with provision for such disciplines as small bore, silhouette, pistol, sporting clays, trap, military service rifle, air rifle, Western action and running targets. The longest rifle range would be 1000 metres, with 2 kilometres behind for the safety template. It sure sounds great!

The problem is that after working on this for 20 years, or more, the public servants in state and local government have done nothing for months.  For example, Council took five months to answer a letter from the Ministers office. A petition has therefore been launched, asking for immediate action. The shooters in South Eastern Queensland need this complex now and we will need it even more in the future, but if we do not act now, it will never happen. Consequently we are asking all shooters to support this petition by signing it HERE. If you don’t have a Queensland address to register for the Parliamentary petition. please forward to all your shooting friends in Queensland that do. Our grandchildren will need places to shoot!

For those shooters interested in a more detailed version of the events that led to this point, Mr Ron Owens has assembled the following information.

The Story So Far

Since the Gympie Gold Rush of 1867 and the settlement of a city in a rural area there has always been a great interest in shooting in the region. Gympie's main Mary St once had many shooting arcades. Some were just alley ways between shops where the men would entertain themselves while the wives went shopping. Up until the late 1950s and early1960s, bus trips were organised on Sundays in the pigeon season to take the shooters to the best spots. Military rifle shooting was also very popular, organised by the Voluntary Militia Movement of the 1880s, which formed itself under the banner of the National Rifle Association. This association supplied trained marksmen and instructors to the South African campaign and World War One, World War Two, Korea and Vietnam Wars.

The Victory Rifle Range was built and opened in 1912 (it replaced the original) and was the hub for all the regional rifle ranges at outlying towns such as Woondum, Tandur, Mooloo, Brooloo, Kandanga, Wolvi, Glastonbury, Widgee, Woolooga, Kilkivan, Theebine, Miva, and many more. All the communities had a rifle range before they had a tennis court or a cricket pitch. The Club Captains, under the 1903 Defence Act, could call out the members who had all taken the Oath of Allegiance and were members of the Militia. The Defence Department provided the land and subsidised the clubs with discount ammunition prices. The ranges were maintained and improved by the volunteer members.

Between the 1960s and the 1990s the Defence Department gradually wound down the Militia and defence in general and seceded many of the rifle ranges back to the State. Without Commonwealth assistance, the emphasis on military prone shooting declined, and the reaction was a huge increase in interest in other sporting shooting competitions.

In the late 1980s the Commonwealth gave the land on which the Victory Range sits back to the State of Queensland, and the State of Queensland promptly put a railway line right through the middle of the range. As this was in the safety zone of the NRA Military Service Rifle Club, this club’s range was closed. There was no consultation and no offer of assistance. Eighty years of community tradition was executed.

Some of the members joined the Kilkivan club but the older ones retired as it was too far to travel. Now the Gympie Service Rifle club has 120 members but no-where to shoot. They make do by hiring rifle ranges from other clubs.

This left the Small Bore & Metallic Silhouette Club, the Gun Club and the Pistol Club, as they have smaller safety zones, still in situ. The land was sold to the Widgee Council for a pepper corn figure on the completion of the railway line and the clubs were allowed to stay.

After Widgee Council and Gympie City Council amalgamated to the Cooloola Shire council, they began in about 1998 to require short term leases (yes, they have to move soon) from the above three clubs. All three clubs continued to grow in membership and develop their facilities using their own resources, without any cost to the Council or Governments.

The Quest For A NEW Cooloola Range Complex

The Gympie Pistol Club was the first formed in 1960. Then the Gympie Clay Target Club commenced, followed by Sporting Clays (Field and Game), Gympie Service Rifle Club, Gympie Small Bore Rifle & Metallic Silhouette Club and Shooters Union. All of these are affiliated with the Cooloola Range Complex Association Inc. On the new Complex there is room for all these disciplines and more, including Western Action (Cowboy), Air Rifle and Running Target. 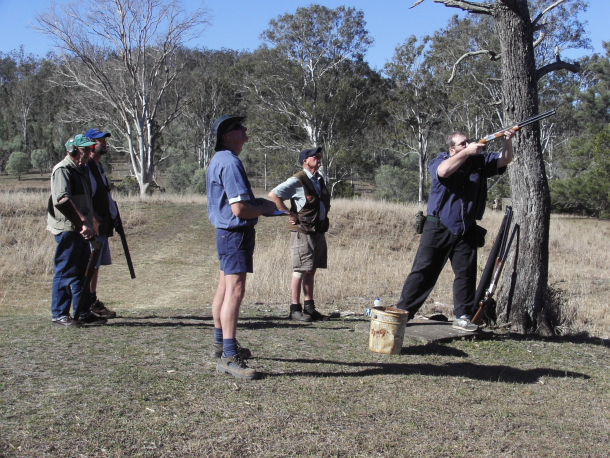 The Cooloola Range Complex Association aims to build facilities for both rifle and shotgun shooters.

The Queensland Rifle Range Advisory Panel resolved to examine State Forest within the Gympie area for its suitability to accommodate a shooting facility. The Department of Natural Resources was commissioned to conduct a report and the leader of the study team was Project Officer, Mr Tim Comino. The Comino Report was submitted to the Minister. The findings established that the Corella Forestry was the ideal place. This was supported by Mr Peter Leeson the Senior Forester, the local Council and both local Members of Parliament.

In 2008 the Association was informed that Sunshine Coast Difficult-to-locate Sports Study, (Tredwell Management Services and the University of the Sunshine Coast) would include support for the Corella Range Complex. Its findings stated:

"Stage 2: The need of a full bore range national standard range up to 1000m has been identified and validated through this Study. The only existing national standard facility is at Belmont and the long term viability of this facility remains uncertain given its location and the pressures of urban consolidation within Brisbane. Recommendations propose to engage Council's north of Brisbane together with selected State Agencies which can assist in assessing the feasibility and delivery of the land for this facility within Curra State Forest."

Which is the Corella land that was included in our submission.

" h). The establishment of a national standard shooting precinct (including full bore) in the Curra State Forest to provide for the long term greater demands for the Sunshine Coast, Gympie and Wide Bay Greater Region be supported by the SCRC."

j) "That Gympie Regional Council in assistance with WBRC and SCRC advocate to the State Government for the acquisition and protection of a suitably sized land mass within the Curra State Forest prior to this being declared a conservation park."

At the Gympie Regional Council General Meeting on 26 August, 2009, the Sunshine Coast Difficult-to-Locate Sports Study report was on the agenda. (Discussion is not minuted).

After many meetings with Ministers and Deputy Premiers we now have an agreement for the land with the Minister for National Parks, Steve Dixon, and a lease is being prepared by the Gympie Regional Council.

When the submission was first tendered to the State government in 2003, the Queensland Police informed our Association that there were 11,000 licensed shooters in the Gympie region. Per a recent article in the Courier Mail 2010 the area still has the highest number of shooters per head of population in Queensland, with over 15 000 licenced shooters in the region (then in 2013, 18,000 licenced shooters). As the pressure on shooting clubs to the south of us has increased and due to the fact that we have had 47,000 new licensed shooters in 2013 in Queensland (a 16 % increase on the year before), many shooters are already travelling to compete from North Brisbane, joining our clubs and enjoying our well established facilities. Our club memberships, due to our region’s limited economy, have to be much cheaper than similar clubs in central Brisbane. This compensates the travellers to some degree.

Preceding the introduction of the National Firearm Implementation Act 1996/1997 during the speeches in the State and Federal Parliaments and again when this confiscation legislation was repeated in 2003, the speeches and press releases from members individually, and collectively from the main parties, promised to increase spending and make further shooting facilities available for range complexes. Those legislative changes drastically affected the lives of law abiding shooters, forcing them to join shooting clubs and to compete in order to retain a reason to own a firearm. Later legislation even prescribes how many attendances each year for each class of firearm. Some of our members attend our clubs at 9am (at weekends) and have to wait until 3 or 4 pm before they can get on a firing point to fire their first shot for the day, as others are there before them.

No other sport has these impositions placed on them, and no other sport has had so little support from government. The Minister of Police Mr Jack Dempsey informs us that we have 600,000 licensed shooters in Queensland, which is currently expanding at that same 16 % per year.

This shooting facility will attract sportsmen and firearm hobbyists from all of South East Queensland to Gympie. We have the agreement in principle from the Minister to excise the land and grant a lease to Gympie Regional Council so they can lease to Cooloola Range Complex Association. The problem is after working on this for 20 years, or more, the public servants in State and local government have done nothing for months, for example Council took 5 months to answer a letter from the Ministers office. The petition is asking for immediate action, the shooter in South Eastern Queensland need it now and we will need it even more+ in the future, but if we do not act now, it will never happen.