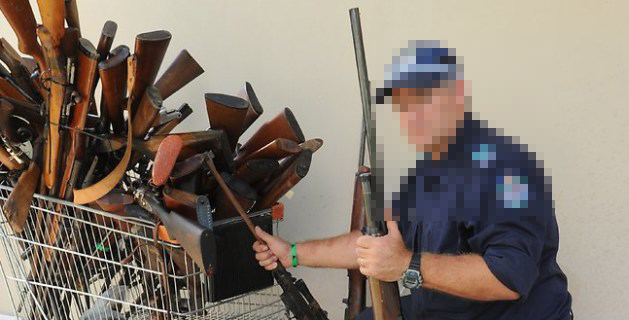 Although I once defied the odds and got nought out of thirty in an open book multiple choice Chemistry test, leading to me studying law and not an agricultural science, Newton’s third law ‘for every reaction there is an equal and opposite reaction’, has always appealed to me, because at least on one level it applies to human and organisational behaviour and not just objects.

Thus when Police are affected by something they react.

Most readers would be familiar with the Edwards tragedy last year.  Mr Edwards was granted a special Commissioner's Permit for a handgun, against the wishes of a gun club he had previously approached, and then he went oput and commited a murder suicide soon after.  Further compounding the tragedy, his distraught former spouse committed suicide earlier this year.

Police did not blame themselves for granting the permit, and are now targeting anyone who shoots and who is involved in a Family Law break up.

Case in point, I am acting for a small dealer at present who is in the process of going through a break up with his spouse.  The parties are separated under the one roof.

On my instructions his former partner was somewhat jealous because he was having a discussion and was actively engaged in play with his son. His wife’s mother suggested she call Police, which she proceeded to do.

Police attended, and as no threat was made, and there was no apprehension of violence, no AVO was issued.

Nevertheless, my client’s licence was suspended.  The reason on the suspension was ‘child at risk’- yet there was on these facts no evidence of this.  The only thing that happened that night that would have been scary to a child was the arrival of two Police Officers after the child’s bed time - although I stress that in this particular situation the officers behaved commendably well, and only followed instructions.

Not every child in a break up is a child at risk, and if Police wanted to target children at risk their attention would be better spent visiting shopping centres and rounding up truanting children during the day, and getting tired drivers off the road.

As you may be aware, Police policy of seizure, for a ‘cooling off period’ of 28 days, does not appear to have any statutory basis and any seizure of firearms needs to comply with Firearms Act 1996 or the Law Enforcement (Powers and Responsibilities) Act 2002.

The Police power to suspend a Firearms licence is set out in paragraph 22 of the Firearms Act 1996, and I have set it out below.

(1)  The Commissioner may, if the Commissioner is satisfied there may be grounds for revoking a licence, suspend the licence by serving personally or by post on the licensee a notice:

(a)  stating that the licence is suspended and the reasons for suspending it, and

(b)  requesting that the person provide the Commissioner with reasons why the licence should not be revoked.

(a)  to state the reasons for the suspension, or

(b)  to include any request that the licensee provide the Commissioner with reasons why the licence should not be revoked.

(3)  A suspended licence does not authorise the possession or use of firearms during the period specified in the notice suspending it.

Whilst not relevant, I shall set out section 11(5) below for your convenience

(b)  has, within the period of 10 years before the application for the licence was made, been convicted in New South Wales or elsewhere of an offence prescribed by the regulations, whether or not the offence is an offence under New South Wales law, or

(d)  is subject to a good behaviour bond, whether entered into in New South Wales or elsewhere, in relation to an offence prescribed by the regulations, or

(e)  is subject to a firearms prohibition order, or

Turning to the Law Enforcement (Powers and Responsibilities) Act 2002 which again relevantly provides:

The following offences are relevant offences for the purposes of this Division:

(c)  an offence against the Weapons Prohibition Act 1998, the Firearms Act 1996, or a regulation made under either of those Acts,

(1)  A police officer may, without a warrant, stop, search and detain a person, and anything in the possession of or under the control of the person, if the police officer suspects on reasonable grounds that any of the following circumstances exists:

(a)  the person has in his or her possession or under his or her control anything stolen or otherwise unlawfully obtained,

(b)  the person has in his or her possession or under his or her control anything used or intended to be used in or in connection with the commission of a relevant offence,

(c)  the person has in his or her possession or under his or her control in a public place a dangerous article that is being or was used in or in connection with the commission of a relevant offence,

(d)  the person has in his or her possession or under his or her control, in contravention of the Drug Misuse and Trafficking Act 1985, a prohibited plant or a prohibited drug.

(2)  A police officer may seize and detain:

(a)  all or part of a thing that the police officer suspects on reasonable grounds is stolen or otherwise unlawfully obtained, and

(b)  all or part of a thing that the police officer suspects on reasonable grounds may provide evidence of the commission of a relevant offence, and

(c)  any dangerous article, and

(d)  any prohibited plant or prohibited drug in the possession or under the control of a person in contravention of the Drug Misuse and Trafficking Act 1985,

found as a result of a search under this section.

22   Power to seize and detain dangerous articles on premises

Premises include vessels, vehicles, aircraft and other places.

The difficulty for Police here is that while a firearm is a dangerous article within the meaning of s21(2)(c) there is no relevant offence, nor is there any suspicion on reasonable grounds that the article is or was used in commission of an offence (s22).

After realising that they were on shakey grounds a Sergeant rang my client, alluded to gaol, and referenced the following alleged offences, none of which are supported by available evidence.

My criticism is with a Police Policy in practice in respect to domestic situations that exceeds the law, and that involves the seizure of firearms without probable cause merely on suspicion of a domestic break up.

Just because Firearms ownership is a privilege and not a right, does not mean that privilege is subject to unfettered discretion by Police to seize firearms or suspend licences without appropriate due process.

When I first came to Australia, I was amazed how far this country has progressed since it was a penal colony, a mere couple of hundred years ago.  However the longer I practice law, the more convinced I am that my assumption is wrong, for certainly in terms of Police attitude, this state is still a Penal Colony.

Simon Munslow is a lawyer who has a lifelong interest in shooting, having acquired his first firearm at the age of nine, and has had an active interest in firearms law since writing a thesis on the topic over thirty years ago at University.
Simon Munslow practices extensively in Firearms Law matters throughout Australia.

He is a regular contributor to the Australian Sporting Shooter magazine’s website on Firearms law matters, has published articles on firearms reviews and firearms law, and occasionally is asked to comment in the broader media on firearms matters.

This article is written for general information only and does not constitute advice.
He can assist you with:

Criminal law & Administrative law and in particular that related to Firearms