There was a foul smell around Turnbull and the Adler shotgun. Late this afternoon the cat was let flying out of the bag.

When the news hit this morning that there would be negotiations over the Adler, my first thought was the NFA review would be used to do his dirty work. The cards were soon shown when Turnbull said the "import ban on lever action shot guns with more than 5 rounds will stay in place until there is an appropriate reclassification."

The issue has been hot all day with reports that the Turnbull Government was willing to negotiate with the Liberal Democrat over the legislation in exchange for his vote on the Australian Building and Construction Commission (ABCC) legislation.

A temporary import ban on the high-capacity Adler shotgun was introduced under the Abbott Government in 2015. This was set to expire in July, but the ban has been extended.

The anti-gun crowd are pedalling that the laws are being watered down but it’s a continued publicity stunt to push their agenda. Lever action shotguns were never included in Howards laws regarding firearms. They are a category A firearm.

The anti-gun crowd do not want any guns full stop. The government’s willingness to reclassify the Adler is of concern and it important that we support the parties that support us. Once again it’s the law abiding gun owners that are the losers.

Senator Leyonhjem stated that no one was standing up for the 800,000 Australian firearms owners and called on the Liberals to abide by the existing laws and cease legislating to make them harsher than is needed. 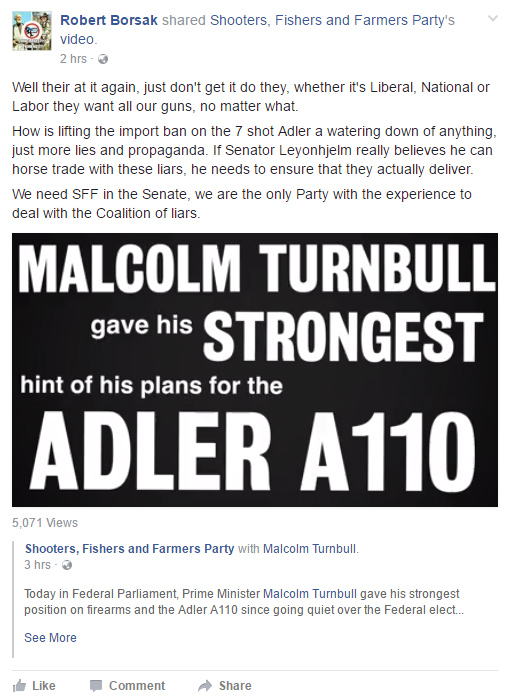 Below are links to the articles in relation to the Adler.