Victorian hunters are at risk of losing duck hunting and many public land hunting opportunities if a labour government supported by Greens is voted in this state election.

Sporting Shooter has provided both Combined Firearms Council of Victoria and the ADA how to vote newsletters. You decide which best suits you and your recreation.

Combined Firearms Council of Victoria How to Vote Information.

They have snuck through bad gun laws without consultation, and look set to cut deals with the Greens to stop YOU from going shooting, unless we can make a stand at this year’s state election.

In fact we know that Labor has plans to bring in even more new gun laws after the election because of a VCAT case we ran last year.

We continue to oppose recreational hunting on public land which has been long standing Greens policy. Sue Pennicuik, Greens Animal Welfare spokesperson, has continually campaigned for the end of duck shooting and a focus on nature based tourism in regional areas instead.

Protect all forms of hunting. No further restrictions to public land access for hunters. Open appropriate areas for hunting that are currently not available. Make changes to Game Management Authority legislation to reflect Vic Fishing Authority. Recognise our right to hunt in legislation.

The Combined Firearms Council of Victoria have put together a detailed how to vote card to take the guess work out at this election.

In the lower house (Legislative Assembly)

Voting in the lower house is easy. All you need to do is number all the boxes on the small white ballot paper in your preferred order, starting with 1.

We suggest you put the pro-shooting parties first. They are (in alphabetical order), the

Then put the Nationals or Liberals BEFORE Labor, and Labor BEFORE the Greens who should be put LAST every seat, other than Yan Yean (see below). It’s important you do this because we need to help the coalition win this election.

In every region, we recommend you vote for the party of your choice by voting “below the line” on the larger coloured ballot paper.

Do NOT put a “1” in any of the boxes above the line, because your vote could eventually go to one of the anti-shooting parties because of said complex deals – it’s important that YOU control the vote and preferences by ALWAYS voting below the line!

We recommend you vote for whoever you want below the line by numbering at least 5 boxes, preferably 7 or 8 of them.

Don’t forget, you can vote for the pro-shooting parties listed above.

Again, make sure you put the Nationals and Liberals before Labor – and the Greens last (if you decide to number every box).

ADA How to Vote Information

Most of the issues that impact on shooting and hunting are decided at State Government level.
This is why the Australian Deer Association puts so much effort into our advocacy in Spring St.

No other hunting organisation has a more consistent or effective presence in Victorian politics. We are constantly working on advancing deer management and public land hunting.

We sat down with Rob Fickling from Moroka.30 last week for a discussion on some of the big issues in more detail - you can watch the video podcast on YouTube or download the audio on your favourite podcasting app.

At election time, more than ever, we see our role as providing you with the most informed views that we can.

Your role is to take that information into account, see where it fits with the other priorities in your life, and factor it into your vote accordingly.
We are not presumptuous enough to tell you ‘how to vote’ - but we will ask you to take your vote and the future of deer management and deer hunting seriously.

Our work on next week’s election began on 30 November 2014 – this report card is a culmination of four years of work rather than a flurry of activity around an election. The reality is that the ability of sectional interests like ours to influence election results is very limited, however, elections are an excellent opportunity for us to work with the various parties to help to set the policy agenda for the next four years.

In December 2014, just after the last State Election, we briefed the Government, the Opposition and the Crossbench on our issues and priorities at that stage.
A lot of those priorities have changed over the past four years but it is an opportune time to look back and assess their performance against the objective measure of that briefing.

We have also been tracking progress against the Sustainable Hunting Action Planover the past two years.
You can read our latest progress report here

We cannot expect Governments to do positive things for hunters and shooters if we are not prepared to give proper credit and acknowledgment when they do.

We have had a lot of success working with the Labor Government and with others like the Shooters, Fishers and Farmers Party over the past four years.

Incumbency brings a distinct advantage here - we would be remiss not to note that the Liberal National Coalition has worked very productively with us in opposition as they did when they were previously in Government.

Significant hunting and shooting related actions and achievements of the Andrews Government have included:

A few months ago, we joined with the other major organisations in the Victorian shooting and hunting scene to formally write to parties to spell out our shared priorities and ask for clear commitments for the next term of Parliament.
The goal of the Australian Deer Association is always to achieve the best possible policy positions, regardless of who is in Government.

We thank all of the parties for their serious considerations and for their responses.

Our focus here is on the major parties for the simple reason that they will ultimately be the ones who form government and be held accountable for their promises.
It is important to acknowledge that this level of accountability tends to mean that the major parties promises are more modest than those of minor parties.
For our specific interests the critical issues are land access and the Game Management Authority.

A precis of the issues and the responses is below: 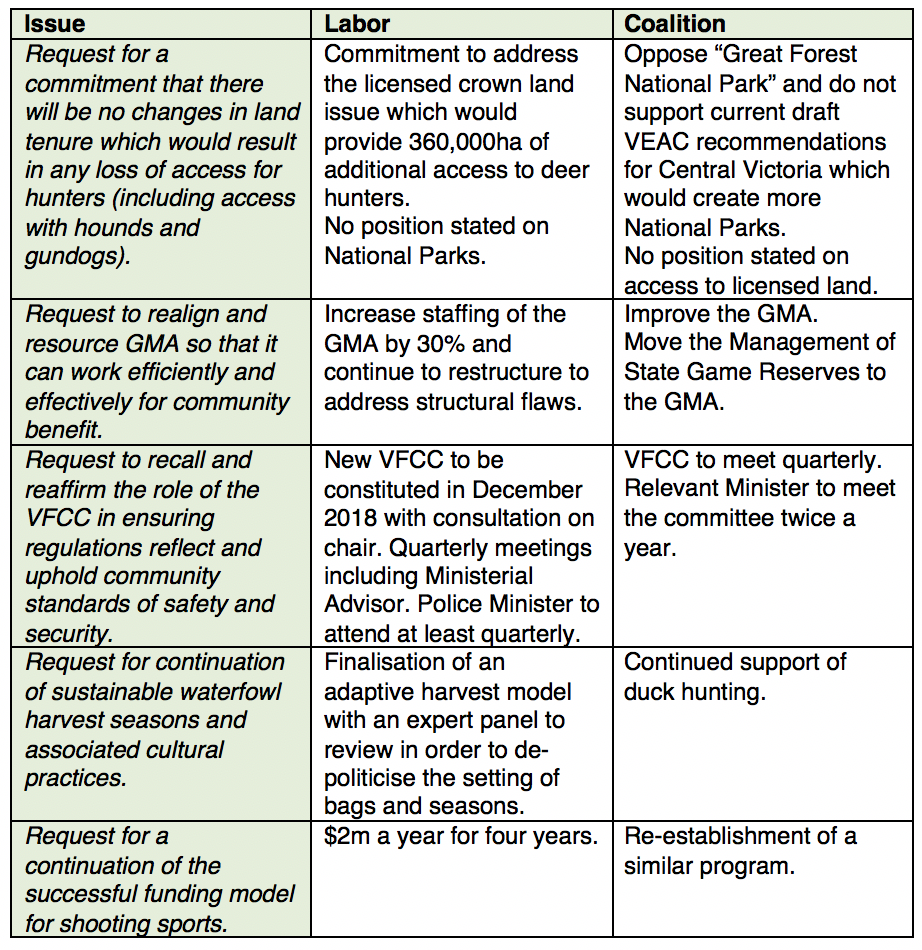 Further to this, both sides have committed to continue to advance the commercial processing of venison for personal consumption and Labor has committed to developing a new Sustainable Hunting Action Plan when the current plan is completed in 2020.

For the most part, the minor parties are of interest in the Legislative Council (Upper House). Although the Shooters, Fishers and Farmers Party in particular are contesting a number of Legislative Assembly (Lower House) seats.

In the Lower House (small white ballot paper) you are required to number every box in order of your preference.
Place a ‘1’ beside the name of your most preferred candidate then number all of the remaining boxes in order of your preference.
Make sure that you number every box.
Many parties are handing out ‘how to vote cards’ but you should remember that you are free to place the candidates in any order you choose.

In the Upper House (large blue ballot paper) you have the option of either numbering one box above the line or five or more boxes below the line – but not both.
Most people vote above the line and their preferences are then allocated according to group voting tickets which have already been lodged by the parties.
If you choose to vote below the line your preferences are allocated by you.

The Greens and the Animal Justice Party in particular have policies which are directly opposed to the interests of hunting and shooting in Victoria.
In the Lower House we ask you to consider putting these parties last in your order of preference and, if you choose to vote below the line in the Upper House we ask you to consider not allocating a preference to them at all.

The Shooters, Fishers and Farmers Party deserve special mention in this update.
Their emergence in Victoria in 2014 presented a challenge to the way we go about advocacy and caused a degree of angst amongst organisations such as ours.
We are pleased to report that whatever fears we had were unfounded. Jeff Bourman and Daniel Young have been active and engaged supporters of the Australian Deer Association and, more importantly, of the issues we have been advocating on.
We have no reservations in recommending that hunters and shooters in Victoria support them.

The Liberal Democratic Party (LDP) and the Australian Country Party also have policies on firearm use and land access which we believe will be seen favorably by hunters and shooters in Victoria.
Our experience from the work we do in Canberra is that LDP Senator David Leyonhjelm has been a valuable ally.

However you vote and whatever the outcome, we will continue working to advance the interests of hunting and shooting in Victoria.

If you are able to help out supportive candidates by handing out how to vote cards on Election Day or at early voting please complete our online registration.