The Hornady Lock-N-Load Auto Charge introduced a couple of years ago, represents the ultimate in dispensing accurate powder charges automatically. This kind of tool represents a major advance in the evolution of reloading. Gone are the days when a handloader was obliged to use a magnetic scale to set up a mechanical powder measure to throw powder charges. One method was to weigh each powder charge on a powder scale, after throwing a slightly low charge from the measure into the scale pan and then using a powder trickler, add a few granules at a time, to bring the charge up to the desired weight.
The precision of a mechanical measure depends to a great extent on the consistency of pulling and returning the operating handle. The operator was obliged to develop a technique of using the same motion time after time. But even after the powder measure was adjusted, it was wise to check its accuracy, and yours, by dropping every fifth load into the scale pan for check- weighing. Accurate loads are supposed to be within a tolerance of +/-1/10th of a grain. However, it is not that easy to attain such a high degree of accuracy using a mechanical measure, even for the most experienced handloader, let alone a careless one. Once, I checked a guy’s reloads and found they varied by three grains up and down!
It is the careless or sloppy handloader who stands to gain the most by acquiring an automatic powder dispenser, but for guys like me who reload vast quantities of ammunition annually, they save a lot of time spent at the bench by dispensing precise powder charges time after time.
Seeing my mates “doing it easy” with their RCBS and Lyman powder dispensers I got all fired up to the stage where I was seriously thinking about mortgaging the homestead to buy one. Then the Hornady Lock-N-Load Auto Charge caught my attention and I requested one for review from Outdoor Sporting Agencies. It turned out to be a good looking unit coloured bright red like all Hornady products. No different to all the other automatic powder dispensers on the market, it is essentially an electronic powder measure which meters the propellant into the pan of an integral digital scale; the dispenser slows down as the charge weight approaches the prescribed amount and then trickles the last few granules needed to top-off the exact amount entered into the touch pad.
The Auto Charge differs from the others in that it has some features that I find most desirable. In addition to a large keyboard with easy-to-read backlit LCD figures and dedicated function keys, automatic and manual dispense options, it has a trickle function, three different speed settings and overcharge protection. In addition, the ease with which it can be emptied of powder makes the Auto Charge one of the most effective powder measures on the market. 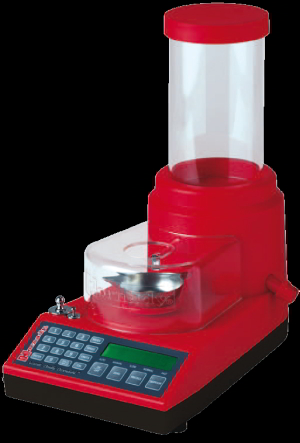