Escaping the rat race while driving my car three hours from Sydney, my thoughts turned to the previous weekend at my hunting block in the Central Tablelands of NSW. I’d encountered a large boar, fighting another pig at first light in the tightly packed tea tree scrub. The commotion of the two boars ferociously snarling, gnashing tusks and grunting in the early morning really put the hairs on the back of my neck on end. 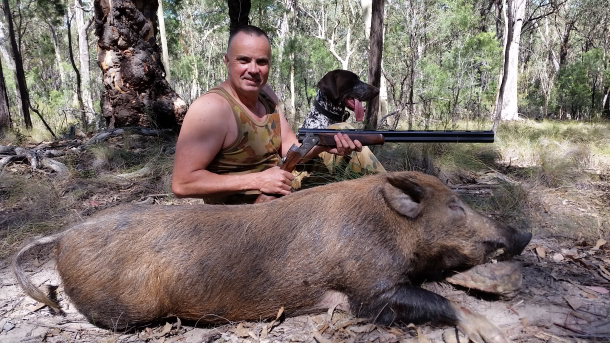 Without my German Shorthaired Pointer Charlie in the close quarters of the tea tree, I’d had next to Buckley’s chance of finding those pigs without being detected, and as predicted, both pigs ultimately gave me the slip. The only thing I saw was the rear end of a very large tusker as he charged off, noisily crashing through the scrub and grunting as he went, followed by the sound of his counterpart crashing off a few moments later. Things would be different the following weekend with Charlie, I thought to myself.

Saturday morning, I stood coffee in hand, pondering my hunting plan from the verandah of the hut located atop the mountain plateau.  Suddenly, interrupting the pre-dawn silence, I heard the unmistakable sound of pigs, grunting and squealing, somewhere way out in the inky-black distance below.

By the time I’d put my boots on, reached for my Beretta Silver Pigeon and ammo belt, the first golden glimmers of sunrise were appearing on the horizon. As a family of kookaburras noisily welcomed the new day, the distant commotion of pigs had gone eerily silent. I wondered if my GSP Charlie would be able to find a good scent leading to the pigs.

The slightest breeze hinted at the direction in which we needed to hunt.  So with gun in hand, Charlie and I were off, hunting into wind,  in the general direction of where I’d heard the pigs.

Into the chest-high tea tree scrub, Charlie’s behaviour changed. His nose pointed up, taking in several snorts of musky, boar-laden scent. Alas, after much excitement and anticipation and Charlie circling back and forth, it seemed the elusive grunters had evaded us.

Changing direction around 90 degrees to hunt the pig sign around the edge of the mountain plateau, Charlie and I proceeded into the scribbly gum forest.  I’d previously seen evidence of pig rooting and disturbance in the decomposing leaf litter in that area and thought it might produce dividends.

Freshly caked, dripping mud rubs and boar tusk marks scoured the trunks of geebungs and native cherry trees.  It left me in no doubt we were hunting the right area, around two thirds of the way up the side of the mountain.  My excitement began to build.

No sooner had I noted the fresh boar rubs and ample sign, when a familiar shape caught my eye; the outline of a large boar behind a bush around 40 metres away.  Standing with its hackles up, staring at something off to the side of my position, it looked a menacing sight.  My thoughts suddenly turned to my dog Charlie.  Where was he?  Without knowing the precise location of my dog, a shot at the pig was out of the question.

Suddenly, the large boar charged a few steps, snorted loudly and propped, obviously perturbed about the presence of Charlie. I then saw my dog, he’d previously been behind a large scribbly gum, obviously pointing in the direction of the boar, but when the pig charged, he’d then run out and became instantly visible and was holding point again, around 20 feet from the menacing looking grunter at least three times his size. Both pig and dog were staring at each other intently, but not for long. The Mexican standoff between GSP and the large boar was quickly ended by the loud report of my 12 gauge Beretta Silver Pigeon and a load of 36 grain Eley Alphamax AAA’s, instantly dropping the beast and bowling him over. I went again with a quick follow-up shot, and whilst probably not required, it ensured that the large grunter was not going anywhere.

Charlie yapped, barked and wagged his tail in exuberant excitement, it had been a great team effort. After several pats and many reassurances, we commenced hunting again. Could the morning get any better?

We hunted the remainder of the escarpment without success and then dropped down into the valley below to see if we could pick up an errant fox or bunny around the blackberries, but none showed themselves.

As the day warmed up and with our hunting chances decreasing, I decided to give the tea tree atop the plateau another go, just in case some pigs had doubled back on us to bed down for the day.

Coaxing Charlie into the warm morning breeze, he methodically worked back and forth, effortlessly worming himself in and out of the myriad of tunnels formed by a variety of animals, including pigs.

Charlie abruptly stopped and pointed in the classic GSP style, freezing in the direction of a large clump of tightly packed heath-like bushes with some curious-looking tunnels leading into it.  No sooner had he commenced pointing, when the sound of a pig’s snort was followed by two young boars, exploding from the beneath heath and bursting headfirst into the surrounding tea tree maze.

Caught out by being surprised, I was unable to snap a quick shot off.  Charlie took off in hot pursuit, disappearing into the tea tree. Then I heard him yapping in excitement. Moving quickly in the direction of the barking, I caught up to find him having a standoff with a small black and white spotted boar on the edge of the scribbly gum forest.  I quickly dispatched the young boar with my faithful Beretta Silver Pigeon.

After taking the backstraps to make into a nice Asian style stir fry for later, we meandered the short distance back to the hut to relax. It had been a great weekend for my faithful dog Charlie and me, and one that I’ll always remember.